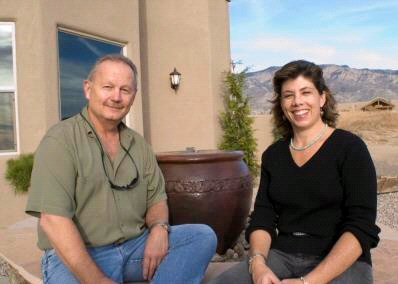 How to stay a step ahead
Custom builder succeeds by combining land development with strategic partnerships STORY Megan Kamerick
PHOTOGRAPHY Steve Bromberg
http://albuquerque.bizjournals.com/albuquerque/stories/2006/11/20/smallb1.htmlMike Knight worked for 25 years in the real estate title industry before deciding to follow his curiosity about developing land.

That was really his primary passion, but soon after starting a land development company in 1992, he and his business partner added a homebuilding company to the mix — Lee Michael Homes.

“It was a good blend,” he says. “In good times, your own company can eat up your inventory.” The strategy has paid off well for the custom builder. By creating their own inventory of land, Knight and his team don’t have to buy land from developers.

The company has built eight communities and is one of seven builders developing La Cuentista — the city’s first all-green residential community. Lee Michael Homes had revenues of $9.8 million in 2005, a whopping jump of 226 percent from 2004 revenues of $3 million. Part of the reason for the jump, Knight says, was that the company had slowed down significantly, then 2005 was “an unbelievable year” of growth.

The slow-down was related to the death of his partner, Phillip Lee Schreffler, four years ago. Until Knight acquired Lee Michael Homes from the estate, he did not have the flexibility or the assets to invest in new projects.

“Once he bought [Schreffler’s] part of the company, we were able to expand the way we wanted to expand,” says Alexa Knight, his wife and vice president of the company.Ironically, after a boom year in 2005 with 26 homes and $9.8 million in revenues, 2006 will be slower, with about $4.5 million in revenues, the Knights say. That’s because in the white hot home market of the past few years, they sold all their inventory of developed lots.”We couldn’t get land onboard fast enough,” Mike Knight says.
Then the price of land in North Albuquerque Acres, where Lee Michael has been building, skyrocketed. It was no longer feasible to build there.

“We choose not to build in areas where we don’t think the homeowner will get a return on their investment,” he says.

The company anticipated having two projects on line this year, including La Cuentista, but ran into delays with approvals and permitting. Mike Knight has decided to change course and focus on land development deals to provide more land inventory. Alexa Knight, and Kris Armstrong, the firm’s project manager, now run the homebuilding operations. “I spent so much time on the homebuilding and I was spread out too thin,” he says. “This gives me the ability to stay out in front of that.”

He also has become adept at getting financing from a variety of local banks to help leverage his own money. His title experience and Alexa’s appraisal experience are handy in this regard, he says, since he knows what kind of information a bank needs to have. The Knights also have a real estate company, Knight Realty & Associates, which helps grow the homebuilding side of the business by making it a one-stop-shop for customers.

In addition to La Cuentista, the company is working on another 53-lot community in the Four Hills area, a 16-lot project in the North Valley and the Tablazon Meadows community in the East Mountains.

Choosing the right land is key, says Mike Knight. He points to a crowded map of subdivisions sprouting in Rio Rancho and declares he won’t be going there.

“I always try to build where no one else is,” he says. He plans to focus on the East Mountains in coming years. Ideally, he would like to put together a group of custom builders to buy and develop about 3,000 acres with its own sewer system and perhaps form its own water company.

“You have to create your own market as a custom builder,” he says. “We have to be in an area of attraction.” Knight has made a practice of forming land development partnerships for all his projects. It is what he is doing in La Cuentista with other custom builders who might not otherwise get the chance to do their own land development. It helps create a well-rounded community and it limits the risk his company takes on, he says. The process of acquisition to development can take two years. By partnering with other builders, that means he’s on the hook for 20 lots rather than 140. He doesn’t allow Lee Michael Homes to take on liability. He forms a limited liability company for each land development deal or brings on partners. But he won’t be a passive investor.

“I’m kind of a control freak,” Mike Knight confesses.
Outside investors approached him about buying homes in La Cuentista, but he refused. Speculators might turn them into rentals, he says.

“They ruin communities,” adds Alexa Knight. “We create communities that appreciate in value.” Kent Maxwell, owner of Maxwell Homes, is one of the builders partnering with him on La Cuentista. He says Mike Knight’s method is a great response to what has been happening in the market.

“Three to five years ago, a medium-sized custom builder could go into a subdivision and buy five to 25 lots,” Maxwell says.

That has changed as large national builders have moved onto the scene, developing large subdivisions and keeping the lots for themselves. Large local builders never used to bother building a subdivision that had fewer than 70 lots, he says.

“Now they’re taking 15- to 30-lot subdivisions that builders like [me] would take.”
With a project like La Cuentista, he says seven local builders “put our financial power and building power together to purchase a subdivision and we’re developing it and building it ourselves,” he says. “It allows us to have lots, and by being on the development side, our acquisition costs are less than buying into a subdivision.” Being a land developer also allows the company to be selective about the parcels it chooses and to develop the land and the homes in environmentally sensitive and sustainable ways, Mike Knight adds.

“We don’t just take any house and plop it on a lot,” says Alexa Knight.

The company also focuses on Universal Design — homes that have features like wider doorways and hallways or other touches that make them accessible to people of all abilities. People who are looking at these homes plan to stay there and age in place, Mike Knight says.

Maryann Cathopoulis has post-polio syndrome and needed a home that was completely wheelchair accessible. She tried to talk to production builders about getting specific features that would accommodate her, but says none would go beyond the universal standards under the Americans With Disabilities Act. After tearing her rotator cuff five times in her former home in Scottsdale, Ariz., getting a home that was just right was important, she adds. Lee Michael Homes did things such as making her stove flush with the lowered countertops so she could slide pots in without lifting them. And the stovetop was dropped eight inches so she wouldn’t have to tilt pots and spill them on herself. The bathroom tub is flush with how her electric scooter sits so she doesn’t have to lift her body into it.

“Lee Michael was awesome,” she says. And she did not want anything that looked like a hospital. “It’s done so it’s functional, but aesthetically beautiful.”

They also made a wide staircase to accommodate a chairlift to her artist’s studio on the second floor. “They were a lot of fun to work with,” she says. “It was a lot of work, but in my case, it was well worth it.” Michael Gallegos, owner of American Property Management Corp., now based in San Diego, hired Lee Michael to design and build his 11,000-square-foot house in High Desert because of the company’s reputation.

“We insisted everything be done with the best craftsmanship possible and they just did not disappoint us,” he says. “The finished product was unbelievable.”

What was most impressive, however, was the firm’s follow-through, he adds. Even now, some six years after building the home, Lee Michael still responds to anything that requires routine maintenance.

It’s that kind of service the company emphasizes in all aspects of its operations.

“When you compete with production builders, the only thing you have to stand on is your reputation,” Mike Knight says.

Want to join the discussion?
Feel free to contribute!