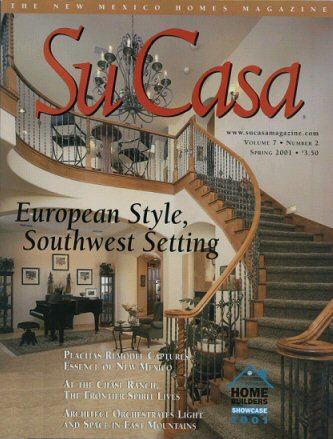 Mike Knight has traveled the world. He and his family are connected to countries from Asia to Europe, and when they vacation, it’s likely you’ll find them in Switzerland or Hungary. And now he has brought elements of old European design to his 4,000-square-foot home in the mountains east of Albuquerque, creating a rustic castle in the Woodlands. 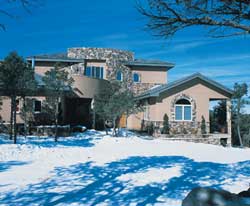 Tucked into a forest of pines, the design makes the most of long views over the forest and toward the mountains while preserving a sense of the ultimate hideaway. Knight, the building partner of Lee Michael Homes, designed it in collaboration with his wife Alexa, construction manager Gene McCutcheon, and California designer Myka. “There’s not one individual who makes a house,” says Knight. “It’s everybody.” The double-door entry leads to a feast for the eyes. Elliptical arches present themselves in graceful curves, leading to formal foyer, rooms, and hallways in each direction. “I want people to have a feeling of warmth when they come in,” Knight says. Pride of place goes to the music room, just inside the entrance. Originally intended for dining, the acquisition of a splendid grand piano played by – and signed by – legendary pianist Joseph Hoffman of Alexa Knight’s family changed the plan. A lush oriental carpet and a brilliant backdrop of Japanese prints unify the space.

The step-down living room looks outward to the pines through a large bay window and inward to what Knight calls “the mystery corner.” Constructed of multi-toned castle stone, two walls join at the corner in a plant-filled space that is to become a cascading fountain. “This is the heart of the house,” says Knight. “You need something massive and strong in the heart of your house.”

One of the outstanding aspects of this house is the use throughout of cherry wood, which gives a warm and burnished appearance to every room. The kitchen presents a lovely display of cherry cabinetry by Davis Cabinets. A second motif is the consistency of color throughout the home, the dominating hues of piney sage carpeting against almond sand walls. In the kitchen, the multi-toned sage, black and ivory countertops underscore this theme.

Adjoining the kitchen is the bay-windowed dining room. Having moved dining from a larger space to a smaller, the Knights overcame the space problem with an octagonal, hand-made cherry table from the Amish Connection and a built-in buffet and leaded glass china cabinet. A handsome collection of plates from Europe fills one wall.

Unexpected touches crop up in many of the rooms of this Knight’s castle. The family room holds a good-looking stone fireplace…or does it? Within the stone surround is not a gas grate but a large-screen television and sound system. An alcove holds a built-in umbrella stand reminiscent of another age. There are two pantries, one just for appliances. The clever powder room is all angles and shows a definite European heritage. In the short hallway between the music room and the dining room and kitchen, Knight has inserted a charming and convenient wet bar.

A separate entrance to the house leads into Knight’s personal office. It’s a stunner, the floor, apron desk, and cabinetry all crafted of cherry wood. Here, Knight conducts much of the business of Lee Michael Homes. This name has been in the business since 1996, although Knight was building homes from 1992 onward. He builds 15 to 20 homes per year, three or four large ones and the rest custom tracts. 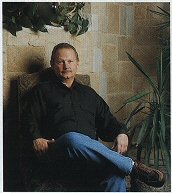 His philosophy of building? “I like to build with quality, efficiency, and for the right price,” he says. “I won’t cut corners. I’m absolutely adamant about doing things the right way.”

Handy to the office is the exercise room, which opens onto its own small deck with rock-enclosed columns. Knight built the deck, like the rest of the house, to require little maintenance. From the deck one can see a riot of wildlife, including birds galore and deer. 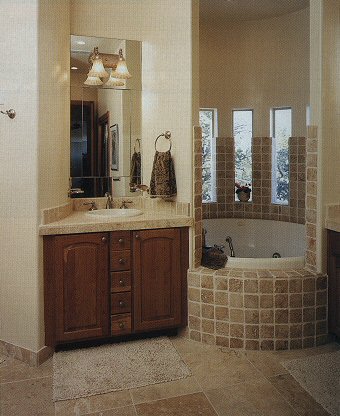 Rounding out the rooms on the lower level of the house are the master bedroom and bath. The bay window of the bedroom of sage and olive gives a wonderful view to the north and west. The room is simple and restful with a cleanly designed fireplace and glowing cherry furnishings. A built-in Jacuzzi nestles in an alcove of elegant windows. Tall, narrow windows look rather castle-like in the round steam shower stall. Tile is tumbled marble of pleasant sand tones. The countertops of the three vanities are of travertine, three-quarters of an inch thick. “Very European,” Knight says. The Knights buffed and rounded the countertops themselves.

The entire look of the house is harmonious. “We wanted to bring the outside colors inside,” Knight says. “I love the whole warm feeling of the house.”

The upstairs of the house is both family place and party place. It’s reached by a regal curving staircase with railings of wood stained cherry and striking banisters of twisted wrought iron. At the top is a large open space carpeted in sage, punctuated by a pool table. A kitchen area of stone tile and cherry cabinetry makes life easy, as does a stereo system that can be directed to any room.

Two bedrooms adjoin the common room: the “in-law area” with bedroom, bath and deck seeming to float over the pinon forest, and the second master retreat with bath belonging to the Knight’s 17-year-old daughter, Sara. “We made a castle turret,” Knight proudly point out. Sara’s room has a bay window, patio doors to her own deck with table and chairs, and an arched doorway to the closet.

The Knight home enfolds a little Switzerland, a little Barcelona, a dash of Asia, some piney woods. But most of all it’s a family’s vision of how they want to live, anchored to New Mexico earth and surrounded by remainders of old Europe. “It’s hard for me to ever leave the house,” says Knight.

Want to join the discussion?
Feel free to contribute!